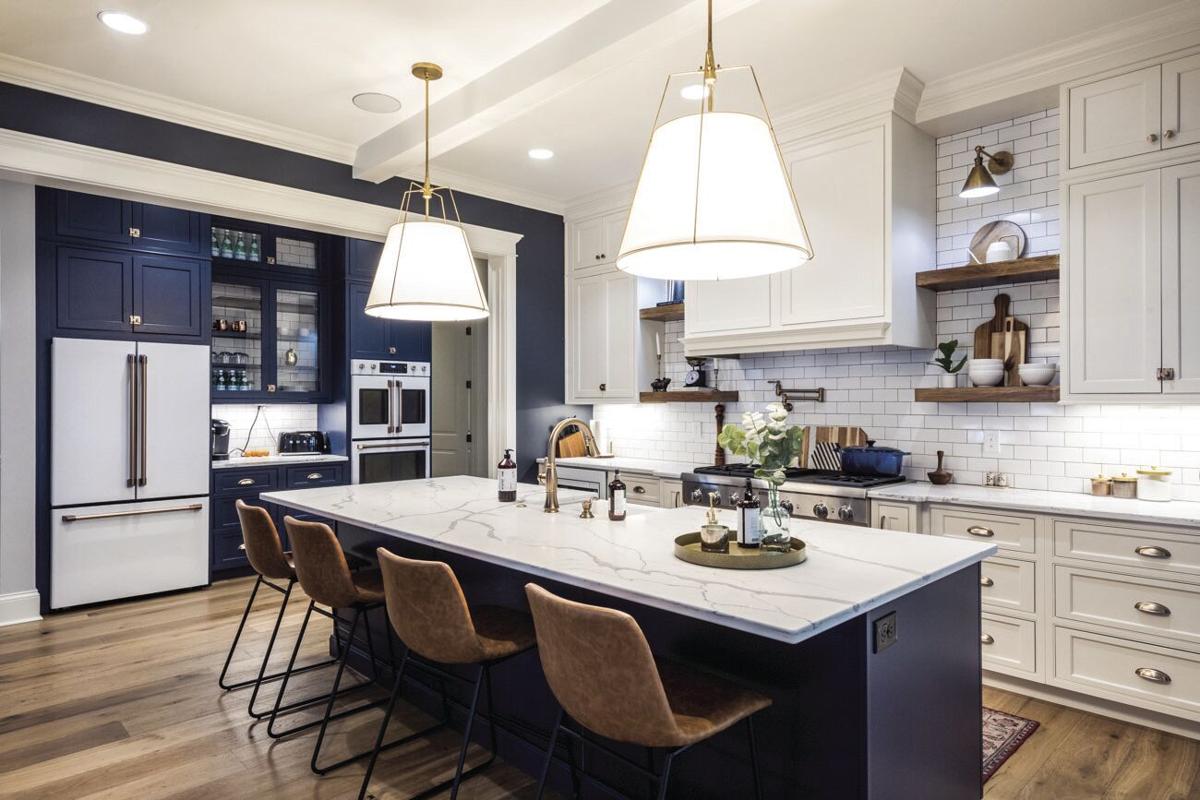 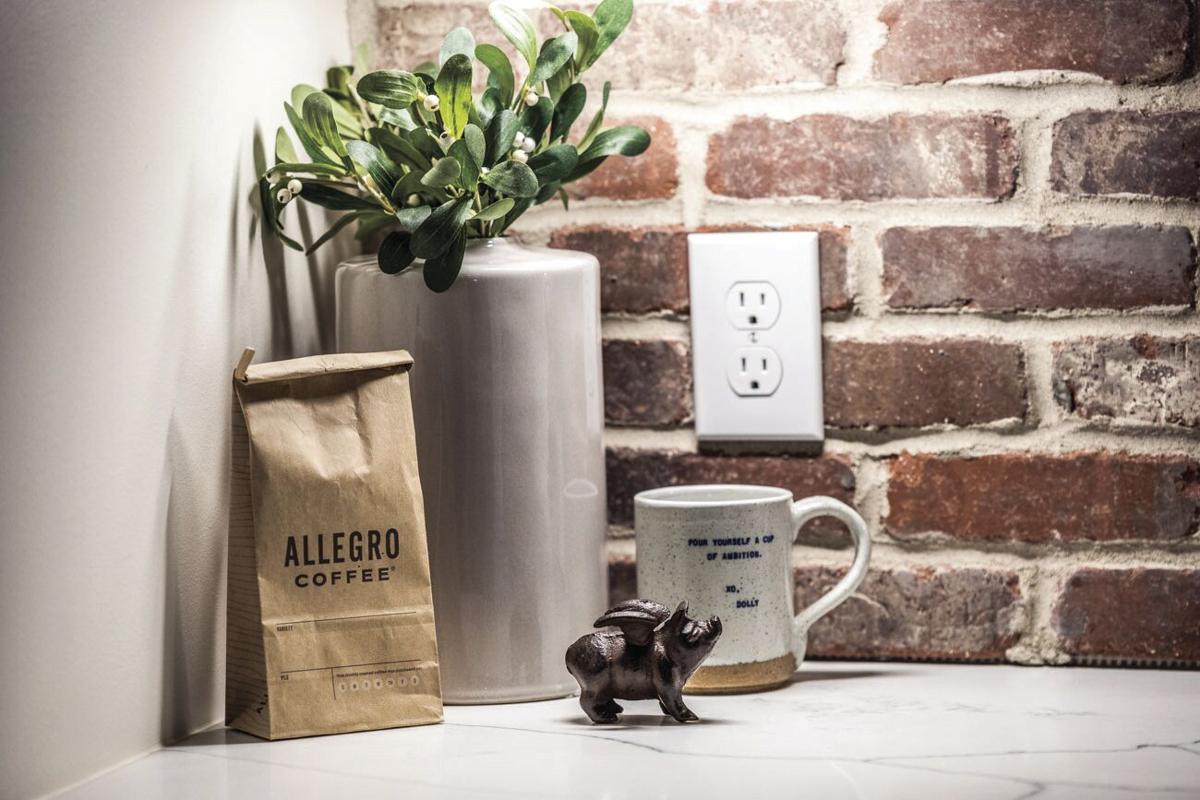 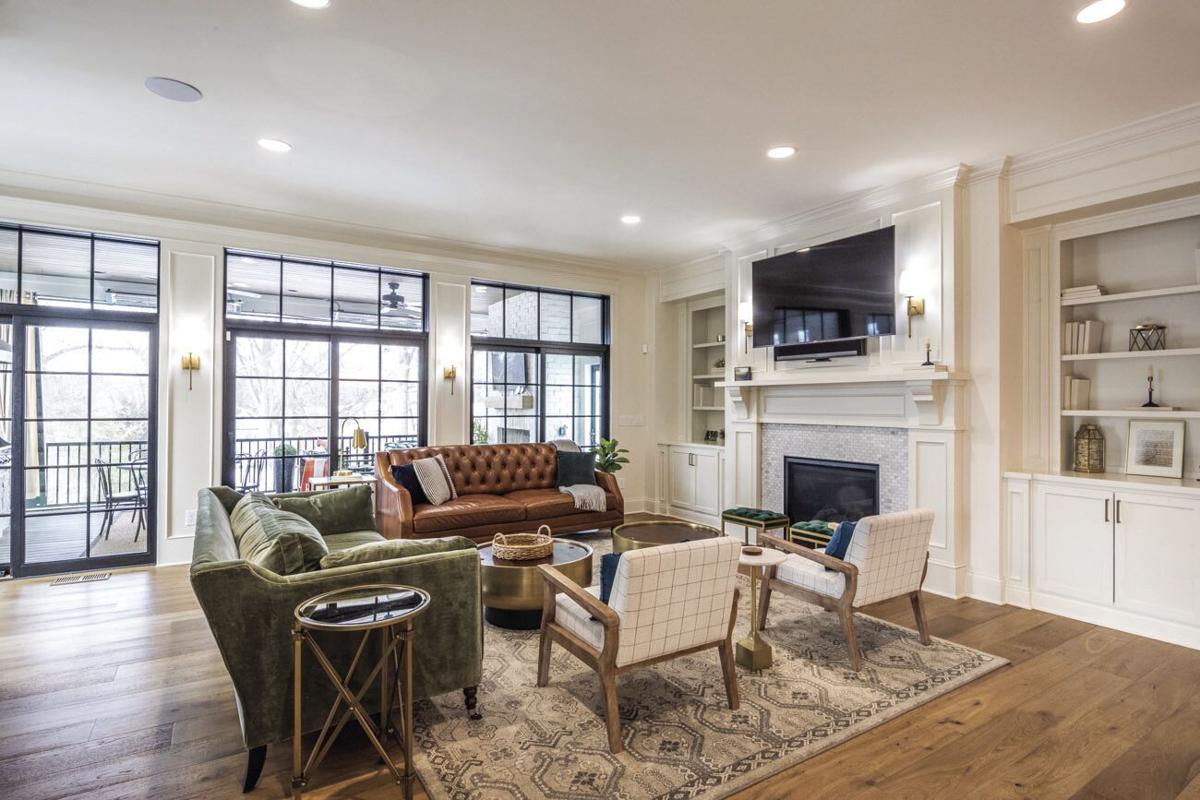 One of everyone’s favorite details in this home is the wall of glass doors that open up to the patio. 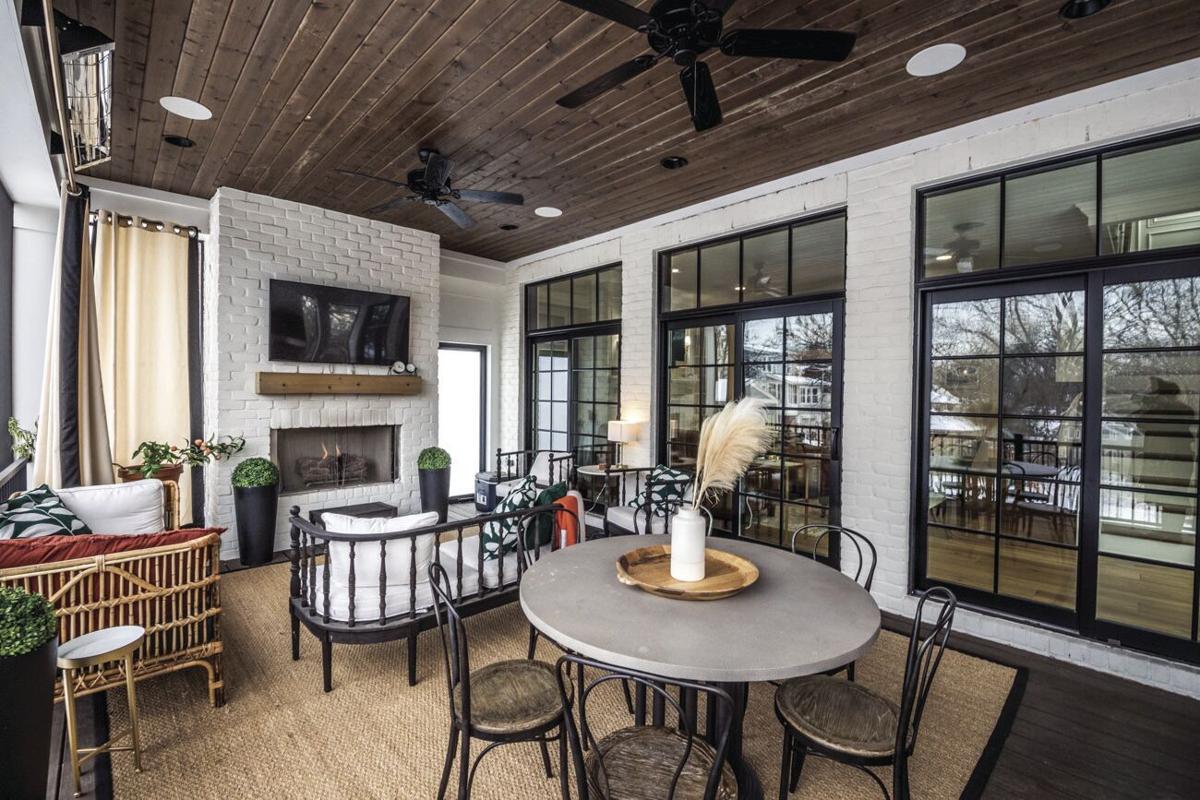 STERLING HOMES AND DESIGNS ON MADISON 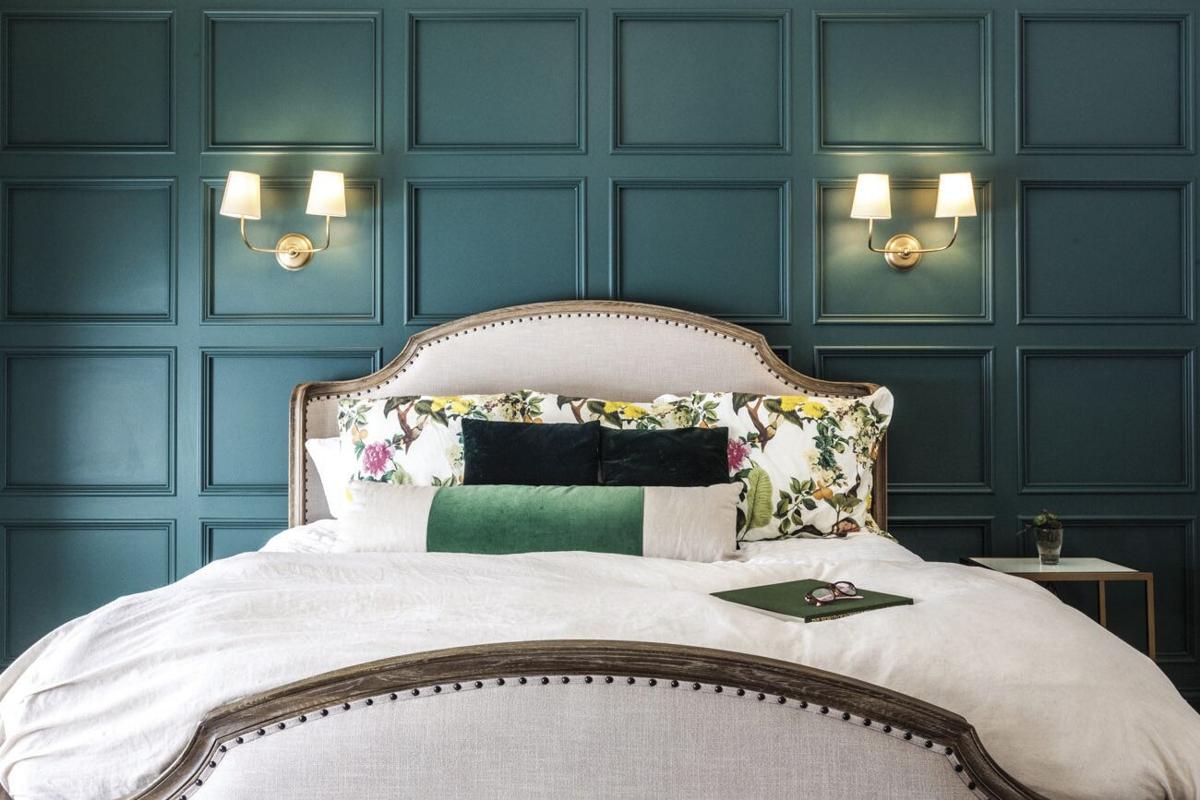 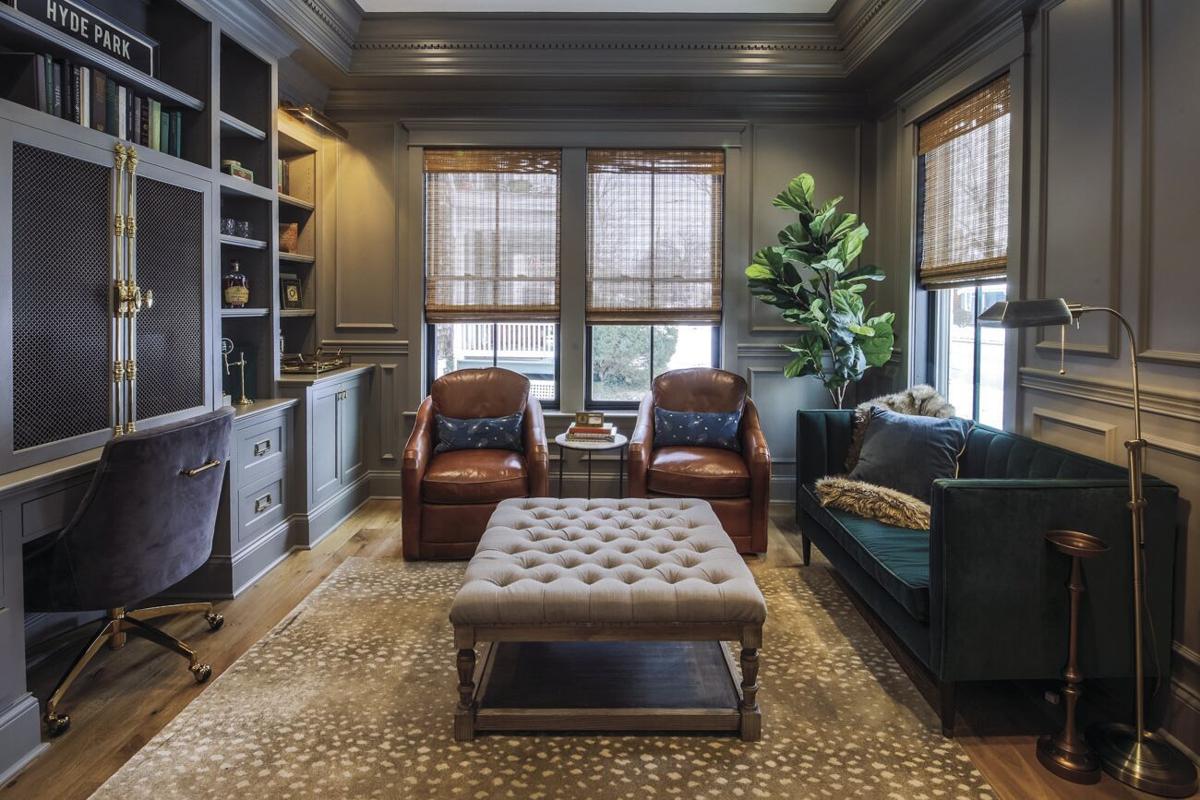 The entire team worked on many scenarios to make this study/den a personal retreat for Ron. 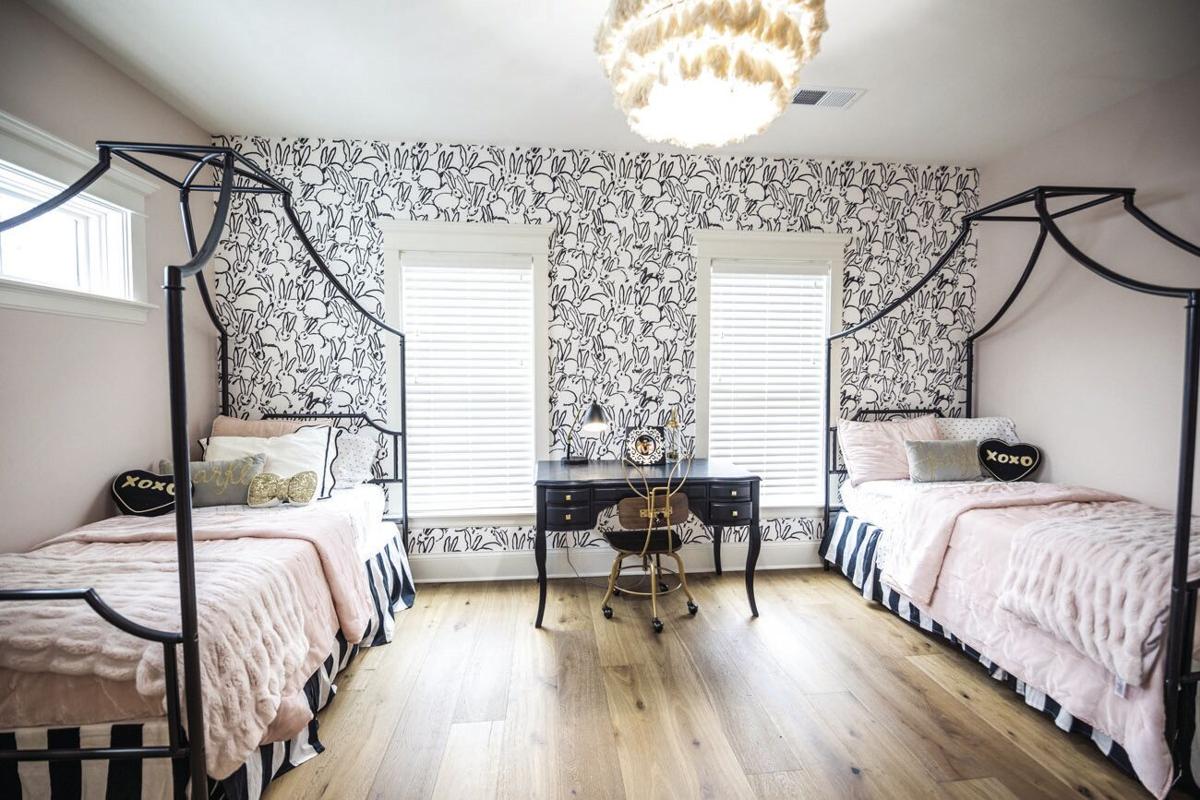 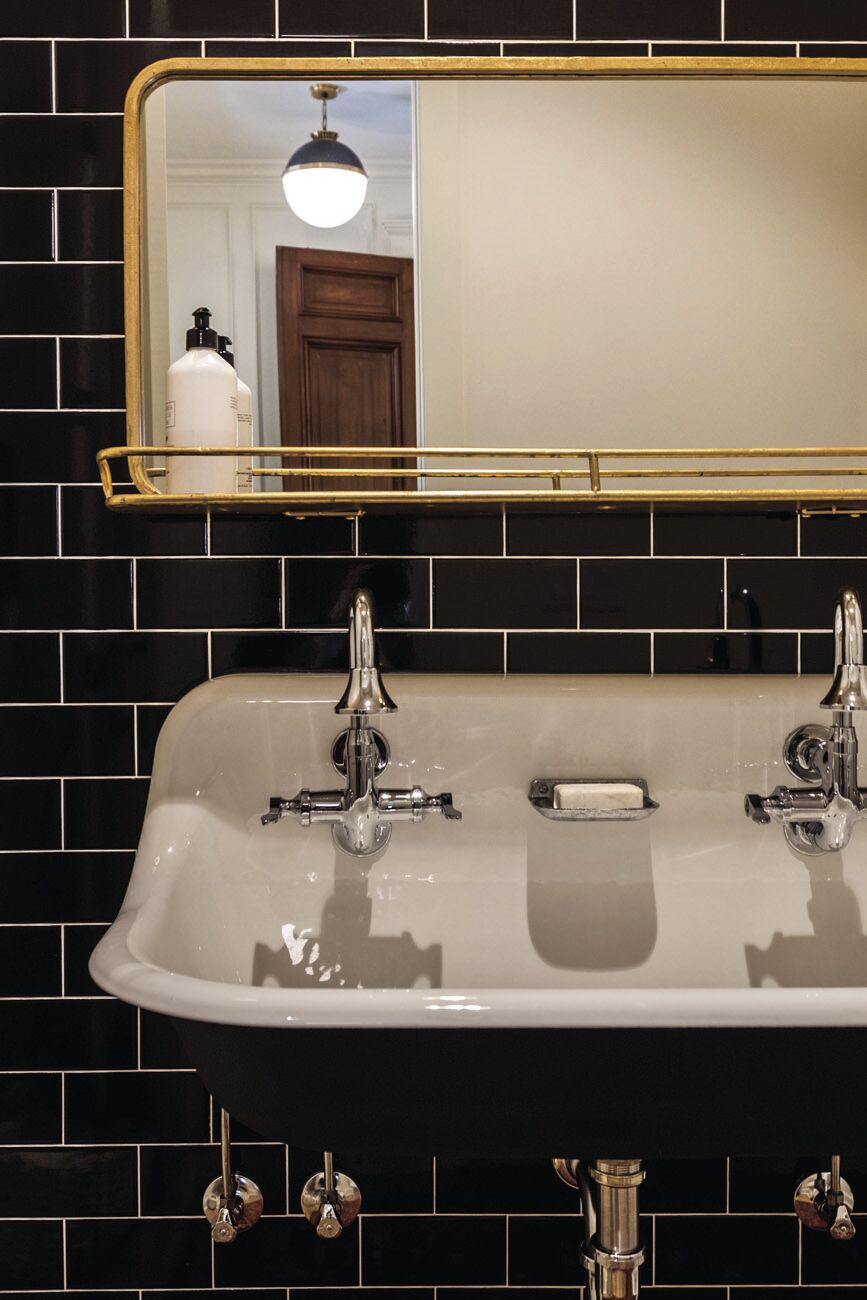 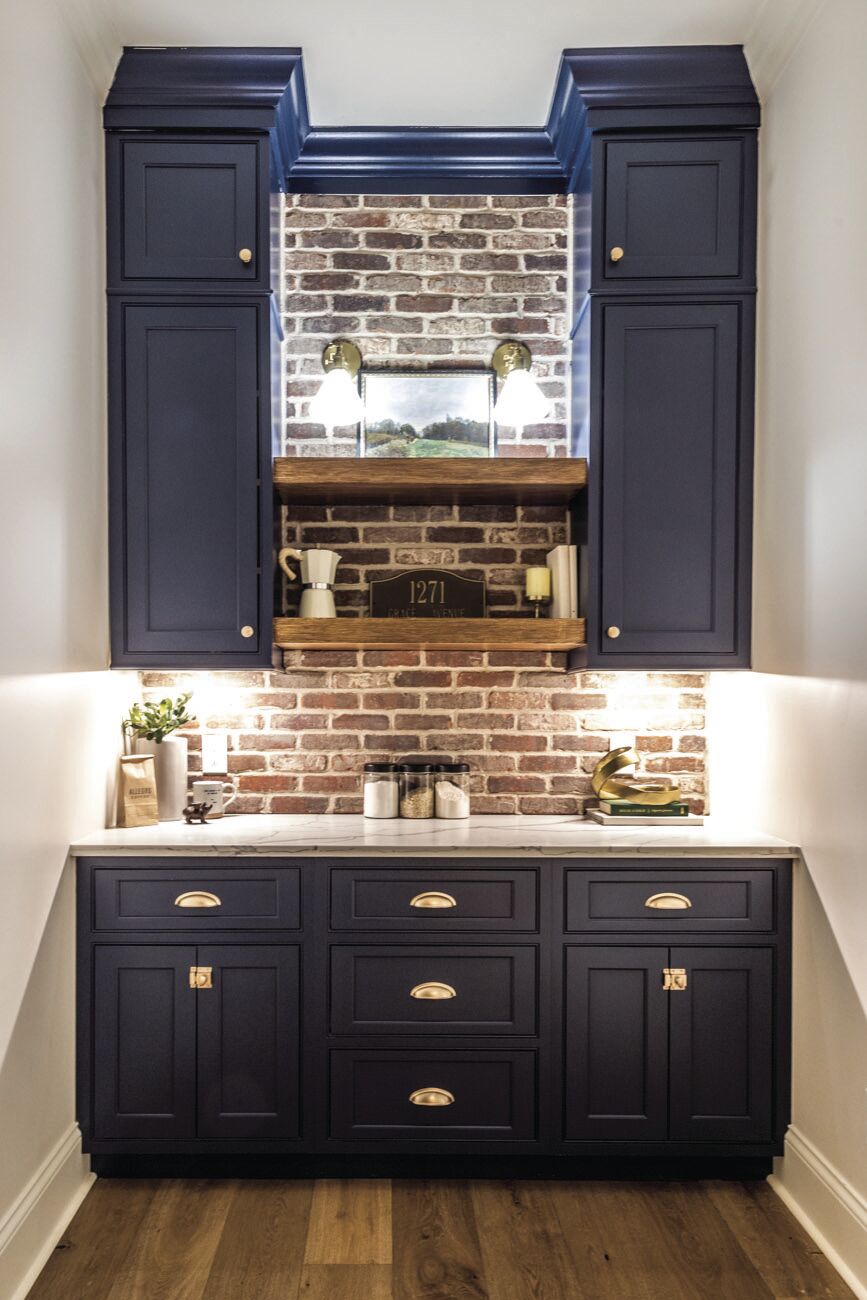 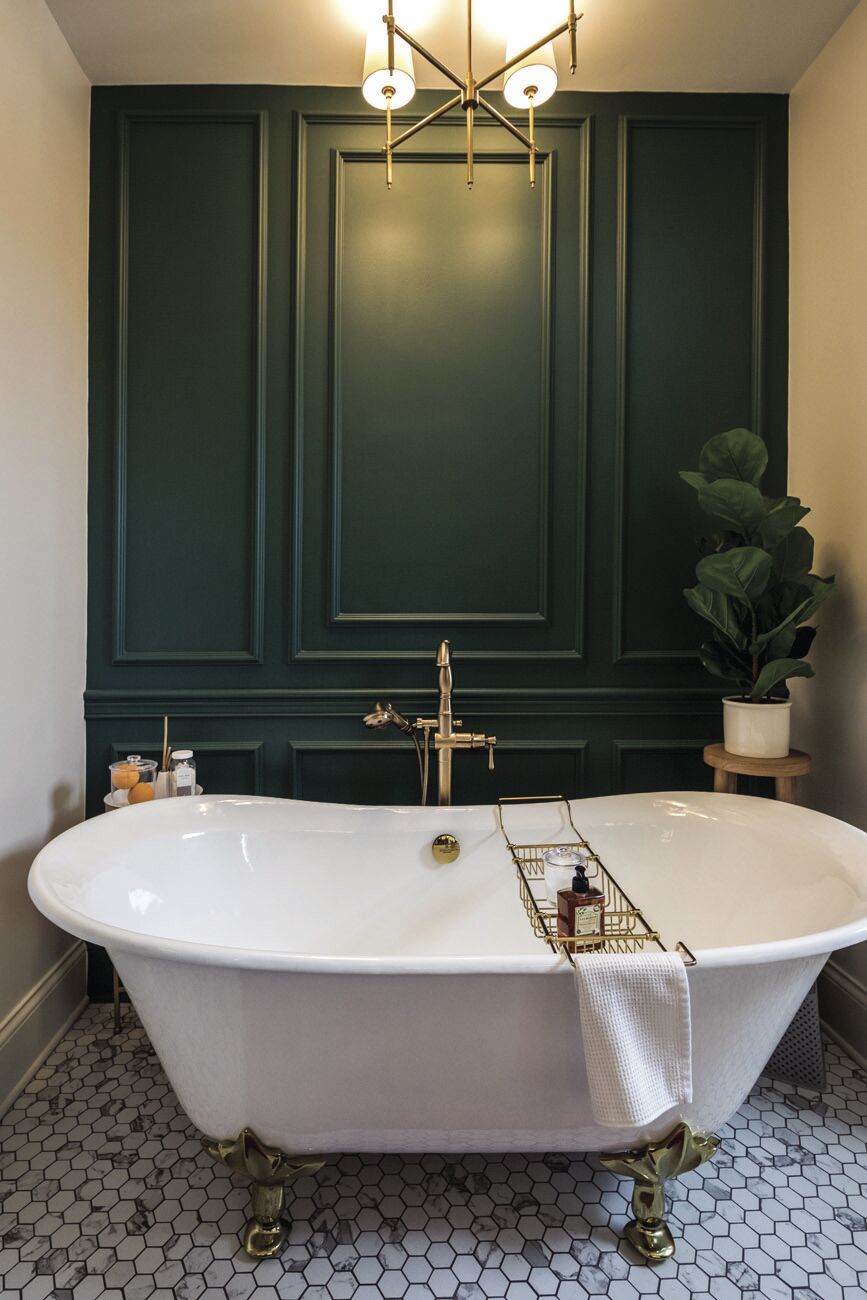 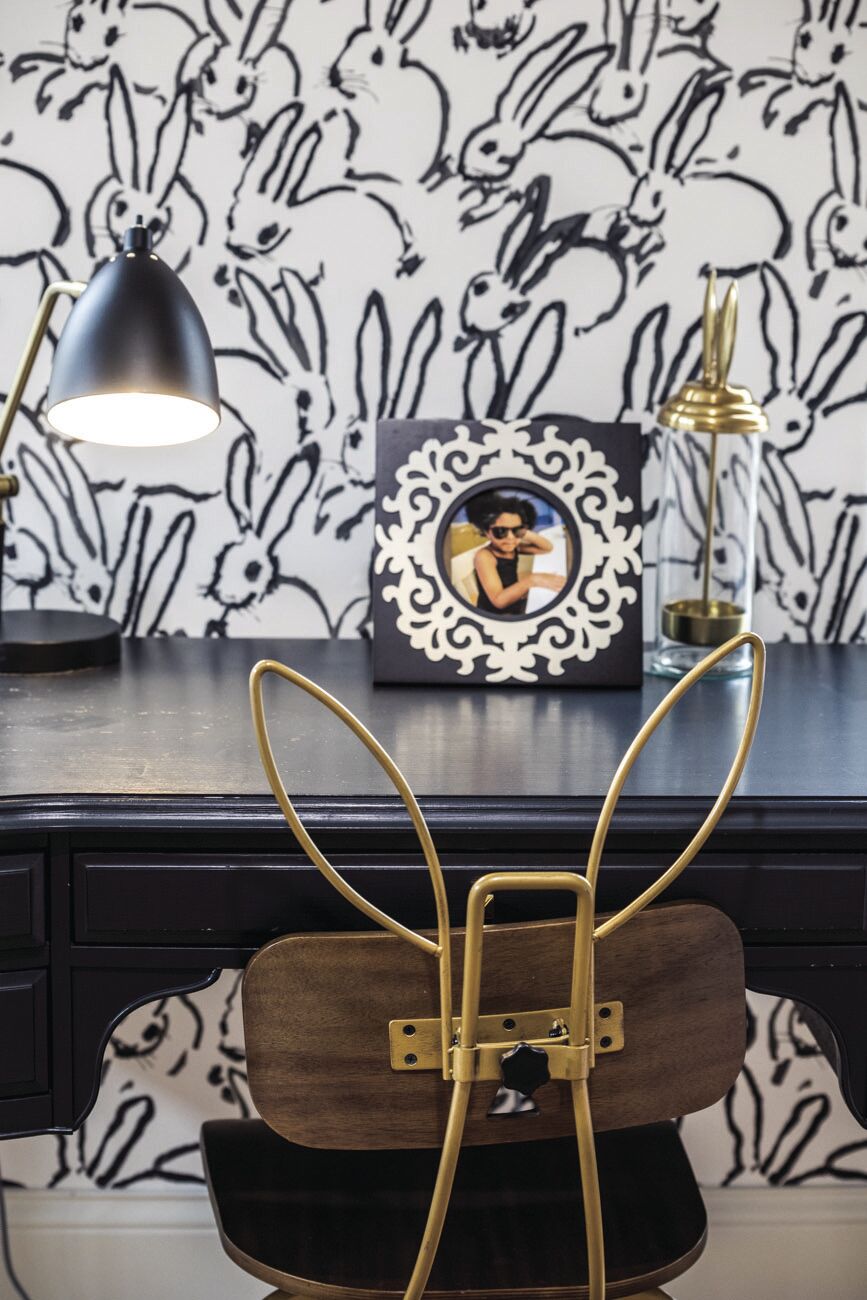 One of everyone’s favorite details in this home is the wall of glass doors that open up to the patio.

STERLING HOMES AND DESIGNS ON MADISON

The entire team worked on many scenarios to make this study/den a personal retreat for Ron.

In life, you’ve got to have grace. For Jenny and Ron Erdmann, they’ve had three heaping helpings of it — the couple has lived on Grace Avenue three times. Their first home on Grace was in 2009 after they got married. They loved the street, but the house was too small when they adopted a baby and soon thereafter were expecting. After moving into a house down the street with a big backyard, history repeated itself as they adopted again and were expecting again.

“We went back and forth about whether to add onto this house or tear it down and rebuild and that’s what we decided to do,” says Jenny. “We wanted to make this our forever home.”

They erected a 4,400-square-foot, seven-bedroom house so each of their four children — Eli (9), Max (8), Isla (7), and Dolly (5) — would have their own room. Little did they know when they were building that soon after moving in, a pandemic would change life as we know it.

“We’re together most of the time, but having four kids so close in age, each of them having their own separate space has been awesome,” says Jenny. She knew the family had special things they wanted to incorporate into the home, so building custom with Sterling Homes was the perfect choice. Choosing Sterling Homes was an easy decision because the couple had friends who built with them and had nothing but good things to say.

“We also loved [owner and president] Brad [Olinger]’s design eye,” says Jenny, who was pleased with the ease of the building process. “Most people say they want to rip their hair out when they’re constructing a new home, but for us, it was seamless.”

She also loved working with Casey Longbottom, project coordinator with Sterling Homes, and Amy Holt, interior designer and president of Designs on Madison, both of whom she describes as top-notch. Designs on Madison is a high-end design firm that specializes in custom designs of furniture, window treatments and finishing touches such as art, wallcoverings and accessories. Their interior designers also work with clients to make new construction selections during the building process.

“We had so much fun,” Jenny recalls. Though she had an idea of what she wanted, she struggled to envision what it would look like in real life. When she met with Casey and Amy, however, they took her ideas and helped them grow by laying out various samples and colors. Amy recalls the initial meeting in which Jenny provided an inspiration picture of the exterior of a local house in Hyde Park. She was immediately excited about the direction this home was taking. Together, Amy and Casey worked hard through many appointments to bring the inspiration to a reality.

The next step was interior selections. Jenny had many mood boards that guided the team for the look and feel for this 1920s-inspired home. The first meeting was with the in-house cabinet designer at Designs on Madison. She loved that they drew it up and worked together through different options. “Once I picked, they tweaked what I liked and it was amazing,” says Jenny. “I never felt stuck at anything, and though it can be easy to second-guess yourself all the time about your selections, it turned out perfect.”

She credits the Sterling Homes and Designs on Madison teams for making the process easy and enjoyable.

“Building a dream house is a once-in-a-lifetime thing. It’s like your baby so you want it to be perfect,” says Jenny, who made every choice with her children in mind. “I didn’t want to build something my kids couldn’t live in.” That’s why, for instance, she chose to make all the grout in the house dark and the boys’ bathroom free of glass and vanities. “It’s shower curtains and pedestal sinks,” Jenny notes. “It stays clean and there’s nothing they can break.” Amy adds that it is important to design spaces that are kid-friendly, but to  also incorporate a design feature to make it special. For example, they added a fun tile detail in the boy’s bathroom and a playful bunny wallpaper in their daughter’s bedroom.

The 2,000 square-foot “Harry Potter”-themed basement includes vintage desks and a bunk room as well as a girls’ and a boys’ wing — perfect for when cousins visit. “All our family is from Florida, and when they all come, there are 17 of them,” says Jenny.

The basement, which Jenny describes as “100 percent kid-friendly,” includes a custom play gym with slide, rock climbing wall, monkey bars, a basketball hoop, and a stage.

“Our oldest son is autistic, so we are homebound with him a lot,” says Jenny. “During quarantine, this basement has been our family’s saving grace!” The family moved into the new build in November 2019, just a few months before COVID-19 hit. On December 31, 2019, they threw a big “Great Gatsby”-themed shindig to ring in the new year. They chose that theme

because the home is decorated to be reminiscent of the 1920s era.

Incorporating trim details into new construction is right up Brad and Amy’s alley. “We love to embrace old school trim details to make a house feel like it’s part of the neighborhood and not a new build,” says Amy. This is especially important on their tear down/rebuild projects in existing neighborhoods like Hyde Park.

“I like Apothecary with lots of trim,” says Jenny. “Every door frame has 17 pieces of old-school big trim around it. I also wanted a clawfoot tub because it has personality. And I love color.” Their home is decked out in different shades of greens and blues, and the master bedroom has a hunter green accent wall with a matching bold green wall behind the clawfoot tub in the bathroom.

“Life is boring without color!” Jenny adds. “I like that ‘wow’ factor.”

“It was really fun working with the colors in this home, especially during a time that we use so many neutrals. The vibrant colors are gorgeous and make a statement,” says Amy. “Sherwin Williams’ Naval paint color in the kitchen against the light countertops and trim creates a beautiful contrast. Benjamin Moore’s Lafayette Green paint color in the master bedroom and bath is stunning.”

The couple opted against a playroom and instead built a giant walk-in butler’s pantry with an exposed brick coffee bar. The pantry includes plenty of storage and a double refrigerator to hold all the kids’ snacks.

“That’s where he watches the games,” says Jenny. “In the spring and summer, we open up all the doors to make one giant covered, screened-in space.” Jenny also loves to be in the kitchen cooking as she has a great view of the giant backyard that’s often filled with deer (and now chickens). Their neighbor also has a free-range chicken who wanders over sometimes.

“During the pandemic, that was my social hour to sit on my porch swing and gab with whomever walked by. Maybe that’s why I’m attracted to the 1920s — a time with no TVs or phones, just everyone on their front porches talking.”