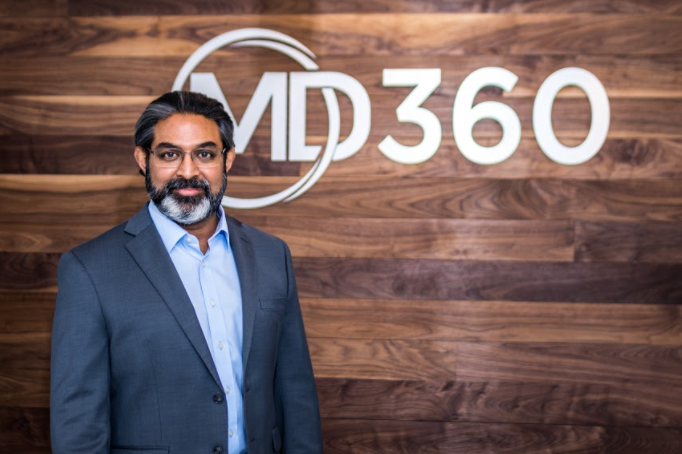 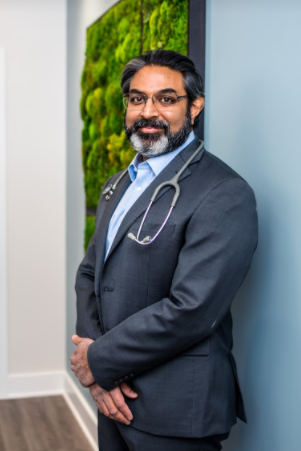 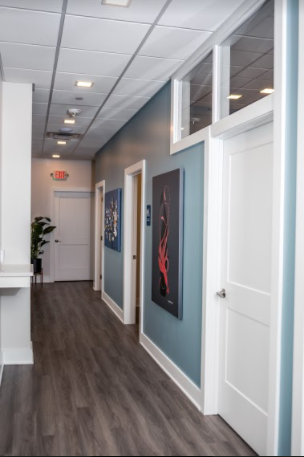 Dr. Amar Bhati’s parents immigrated from London to Cincinnati in 1971. Bhati, born a year later, has been steeped in medicine his entire life, having watched his father, Dr. Anant R. Bhati, who led Good Samaritan Hospital’s Department of Gynecology for many years.

“My father worked in the only field that has a beautiful mix of primary care and surgery, and he was brilliant at both,” says Bhati, an internal medicine physician. He witnessed firsthand the way his father carefully listened to his patients and their families in order to gain and build their trust.

Upon completion of his internal medicine training as chief resident at TriHealth, Bhati signed with The Christ Hospital, joining their Norwood office. He was thrilled to be a part of an over-100-year-old practice and, more importantly, one that embraced the “patient-first” culture.

“I love sitting down at eye level with my patients and their families and getting to know them in order to get a clear picture of what’s going on,” says Bhati. “Communication is so critical.”

Bhati is grateful for his time working at The Christ Hospital. He relished working with his peers and soaking up as much as he could from his mentors. Most of all, he enjoyed working with the hundreds of patients who trusted him with their health care. With the help of an exceptional staff, he was able to build up a strong practice. Like many physicians these days, the clerical side of medicine was becoming burdensome and was taking away valuable time he could be spending with his patients. Surveys revealed that many of his patients were concerned that he looked tired or worn-out.

“When my patients said they were worried about my health, that was a red flag,” Bhati recalls. He knew that something had to change. Though he wanted to remain in primary care, he was eager to try the concierge medical model that would enable him to pare down the number of patients so he could give them the time they deserve. He purchased an office space in Kenwood and built it out, creating a warm, inviting environment that feels more like a spa than a medical facility.

“A typical concierge doctor will only see six or seven patients a day, 10 at the most,” says Bhati. Offering same-day and next-day appointments, he keeps a flexible schedule in order to accommodate his patients in case they need to be seen earlier or later in the day. Given the current pandemic, he has expanded the telemedicine portion of his practice. He also gives his patients the ability to contact him directly if they need to.

“I love that personal touch with the patient, which I feel has been lost,” says Bhati.

He chose to name the practice MD360 – Modern Wellness because he believes in the strength of team-based health care. “All these things work hand in hand,” says Bhati, who wants his patients to have access to dieticians, nutritionists, physical trainers, acupuncturists, yoga instructors and anyone else who can bring back modern wellness.

“I can get their blood. I can check their labs. I can make sure they are on the right doses of medicine, but I want to help them lead an overall healthier lifestyle,” says Bhati.

In addition, he feels strongly about assisting his patients when it comes to dealing with insurance companies and pharmacies. “It can be a daunting task navigating the maze of health insurance and prescription med coverage. I believe it is a physician’s duty to be an advocate for their patients,” Bhati says.

A St. Xavier High School and University of Cincinnati alum, he calls himself a “hometown boy” who has never had any desire to put down roots elsewhere.

“Cincinnati is where I wanted to live and raise a family,” says Bhati, who is married and has two children.

Bhati’s parents instilled a sense of service in him and his whole family, so when Bhati began serving on the St. Vincent de Paul Charitable Pharmacy Board and the City of Cincinnati Board of Health (chairing the finance committee), he found that he loved giving back to the city. That’s why a portion of his retainer goes toward helping local nonprofit health-care-related organizations.

Bhati and his staff are strictly following the Centers for Disease Control and Prevention (CDC) COVID-19 guidelines when it comes to outpatient care, including using proper personal protective equipment (PPE), physical distancing and regular handwashing. In addition, they are offering rapid COVID-19 tests to their patients.